Gérard Gachet was born in Fez (Morocco) on 18 July 1935. He spent a year at the Ecole des Beaux Arts in Paris, and two years at the Ecole des Arts Decoratifs in Strasbourg, before joining the Centre dramatique de l’Est, again in Strasbourg, for three years as a trainee stage designer. Along the way, he did countless part-time jobs, developed a passionate interest in music and song, and wandered back and forth between Paris and Strasbourg. Appointed to a secondary teaching post, he taught drawing for five years in Metz and Saverne, eventually deciding, in 1965, to settle in Strasbourg and concentrate on his own work. This decision to live in the provinces reflected his determination to avoid the art coteries of the capital. Like certain 19th century painters, he wanted to devote his life to art without yielding to any of the usual moral, emotional, family, social and economic pressures, and consciously chose to be solely — and utterly — himself.

Rejecting the conventional drawing techniques, he normally worked with a ballpoint pen (achieving a softness of line which no ordinary pen could give him), and occasionally two pencils — one a soft black, the other white — or the air-brush. He also produced lithographs and zinc engravings, but his growing interest in half-tones made drawing his favourite medium. He worked on coloured papers, usually in monochrome, sometimes in bichrome — regarding colour as too "discursive" for what he wanted to say. He very rarely painted, and then used pre-painted boards, scratching through the layers to produce the desired effects.
On average, every drawing represented a month's work. The first stage was a series of sketches, using a model, and here the "scene" which the final drawing would capture already began to emerge.

A lifelong insomniac, Gachet did this painstaking preparatory work at night or, more accurately, in the early hours of the morning, when his sensitivity and perceptions were heightened. He often jotted down his ideas instead of making sketches, and then went out fishing before settling down to work. This early-morning contact with nature played a definite part in his work, since it gave him the tactile and visual impressions which were, in the fullest sense, the humus of his art. It was only at a later stage that these impressions found their way onto paper, and the final drawing, however slow and difficult to do, was merely the technical part of the whole operation — bodying forth and "dramatising" on paper a subject which he had already found and visualised. If nature, as a source of inspiration, and art, as an imaginative treatment of nature, are to be fully matched, the artist needs a certain openness of spirit, and must preserve it jealously.

This possibly explains Gachet’s distrust of the Surrealists (though he felt close enough to them at one stage in his career to exhibit with the "Alsatian Surrealists" in 1968). Specifically, he complained that the Surrealists had tried to "codify their methods and systematise disorder", had "invented themselves from their own principles", and had "seen themselves as a school and framed aesthetic and political obligations for themselves in consequence" — had, on other words, accepted a straitjacket while claiming to be free. The severity of this verdict did not stop him from admiring Ernst, "when he sets out to be genuinely fantastic and not simply to strike surrealistic attitudes" — although he rated him far below Fuchs, for whom his respect was unbounded. Paradoxically (at least on the surface), his favourite painters were Rembrandt and Goya, whose work has nothing of the symbolism which marks his own drawings. The painters whom he most disliked were those who worked their styles like ore-laden seams. He himself, when ever repetition began to seem a danger, forced himseld to change tack by adopting a new technique. Nothing annoyed him more than the popular belief that the artist must suffer to find inspiration. It was happiness that brought his ovn powers to full fruition. His best work depended on emotional and moral calm, for which his need was insatiable. Indeed, his work was never richer than when he made his home beside a pond and went fishing every day, or when, in his last five years, a woman brought him the emotional stability he needed so desperately. The darker moments in his life, on the other hand, were matched by "gaps" in his inspiration. Loving the fantastic and tireless in pursuing mysteries, he also loved laughter and good food - and was loved in turn for his wit, generosity, friendliness and charm. Always surrounded by friends, books and animals, he was particularly fond of snakes, loving them for their beauty, the "marvellous” feel of their scales and the direct quality of his own response to them. He went back to teaching in 1980, at the Ecole des Arts Décoratifs in Strasbourg, and gave generously of his time to those pupils — two or three a year — in whom he sensed "real" artists. The others, he said, did not interest him, and would never be anything more than "picture-makers".

He was passionately interested in ethology, entomology and mineralogy, and it was his love of nature — including the oddities and incongruities of nature — which he transposed and magnified in his own art. Not surprisingly, there is no cruelty in his work — which is, however, charged with a carnal, animal, natural sensuality. Nature, after all, is not cruel, but violent. And it is this violence which finds expression in Gachet’s drawings, a violence which culminates ineluctably in death — the death which is the nurturing source of all life. 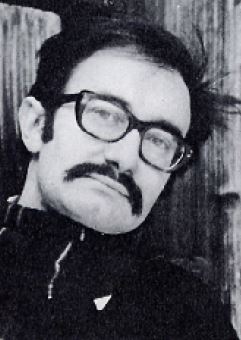 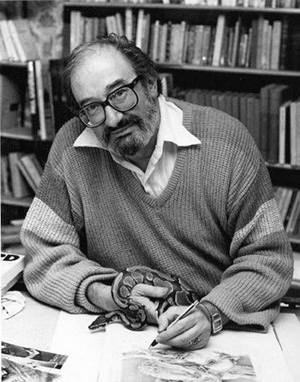